October “Book Review” and Give-Away: As it is Written: A Brief Case For Karaism 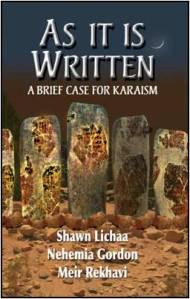 I guess I can’t exactly do an objective book review here, since I am a co-author of As it is Written: A Brief Case for Karaism. As I mentioned previously, I tend to follow the Israeli saying that roughly translates to, “A baker should not comment on his own work.”

So instead of my telling you how awesome As it is Written is, I’ll let this Amazon review do all the talking for me: “Not very well written, short, and does not go in depth into explaining Karaite Judaism. It is a short, basic review.”

Well, you can’t win ’em all. But other Amazon reviewers found the book to be helpful: “Finally, a clear, concise, and long overdue introduction to Karaism that caters for the layperson and the student.”

A little background on the book might be helpful. When I was a freshman in college at the University of California, San Diego, my roommate sponsored a talk by Jews for Judaism, whose central purpose was (and is) to give Jews the proper knowledge base to respond to missionaries from other religions. One of Jews for Judaism’s educational pamphlets at the time contained a footnote that stated (something to the effect of), “People accuse the Rabbis of making up their own laws. This is not true.”

This one footnote changed my life. Although Jews for Judaism did not intend it as such, I felt that the footnote was a direct attack on Karaites, who do not believe in the authority of the rabbis to enact “mitzvot d’rabbanan” (or “commandments of the Rabbis”). The footnote inspired me to learn more and more about Karaite Judaism and I somehow ended up in an online Karaite forum with Nehemia Gordon and Meir Rekhavi.

A few years later, we (with a shout out to the late Mordecai Alfandari!) wrote As it is Written. The work draws on various of their writings and on Nehemia’s and Meir’s responses to questions in the online forum. I structured the work after the Jews for Judaism pamphlet and sought to give Karaites the tools to respond to various anti-Karaite polemics. In that regard, the aim of As it is Written was exactly what its subtitle suggests, a short defense of Karaite Judaism.

Of course, over the years, I came to learn that whether or not someone believes in in the Oral Law is mostly a matter of faith – and almost no amount of proof-texts will change that core belief. And I’ve also learned just how many Jews are interested in Karaite Judaism. As I’ve matured, I realized these Jews (including historical Karaites) needed a positive Karaite resource and that Karaite Judaism would never survive if it was simply an “anti-Rabbinic” movement.

That is one of the reasons why I work very hard to keep A Blue Thread from being the latest in the line of Karaite-Rabbanite polemics. So, whenever I write my next book (and I like to think that I’ve become a better writer since my first one!), I plan to focus on the Karaite Jewish experience – rather than why Karaites are “right.”

Until then, I hope you enjoy A Blue Thread and As it is Written. And from October 2, 2013-October 6, 2013 (inclusive), you can get free ebook copy of As it is Written: A Brief Case for Karaism from the Amazon Kindle Store.

A Blue Thread is giving away 15 print copies of As it is Written.  A Blue Thread will even cover the shipping. To be eligible for the give-away, simply comment on the post below. Your comment could be anything from “Choose me!” to “I love this book.” I’ll hold a random drawing on October 9th, and will notify the winners via email. My only hope is that after you read the book, you will post your thoughts to the comment section below. (If you’ve already read the book, feel free to do so now.)

If you miss out on this give-away, fear not. You can purchase the book from Amazon.  And we intend to do a similar give-away with another book next month.

Disclaimer: I have not received (and have never sought) any royalties from As it is Written.

Filed under Book Club, Books, What is Karaite Judaism

105 responses to “October “Book Review” and Give-Away: As it is Written: A Brief Case For Karaism”